VidSummit is the leading Video Marketing Conferencing hosted in Los Angeles, California each year in October. 2017 was the first year VidSummit sold virtual ticket access to the live conference produced with PTZOptics cameras. Derral Eve, the event organizer, is a social media leader and YouTube influencer who was able to leverage his social media channels to drive massive amounts of virtual tickets for the event. The event was two days long and included live streaming from three separate rooms. Virtual ticket holders were given access to a private CDN (Enterprise Stream.Live) where they would receive exclusive access to the live conference plus on-demand access to the video content. 98% of virtual ticket sales also purchased the on-demand video content and virtual ticket revenue surpassed $100,000. 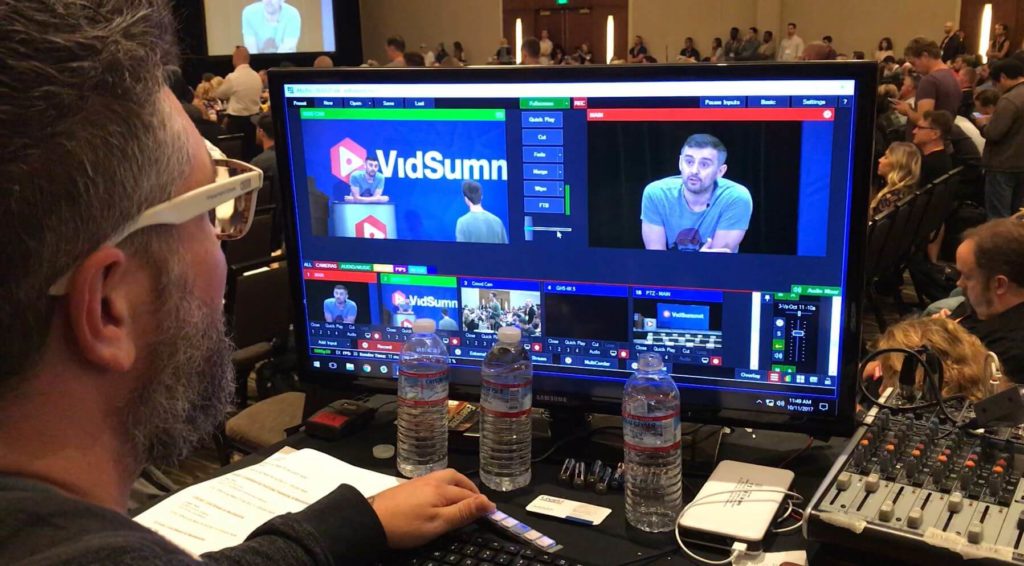 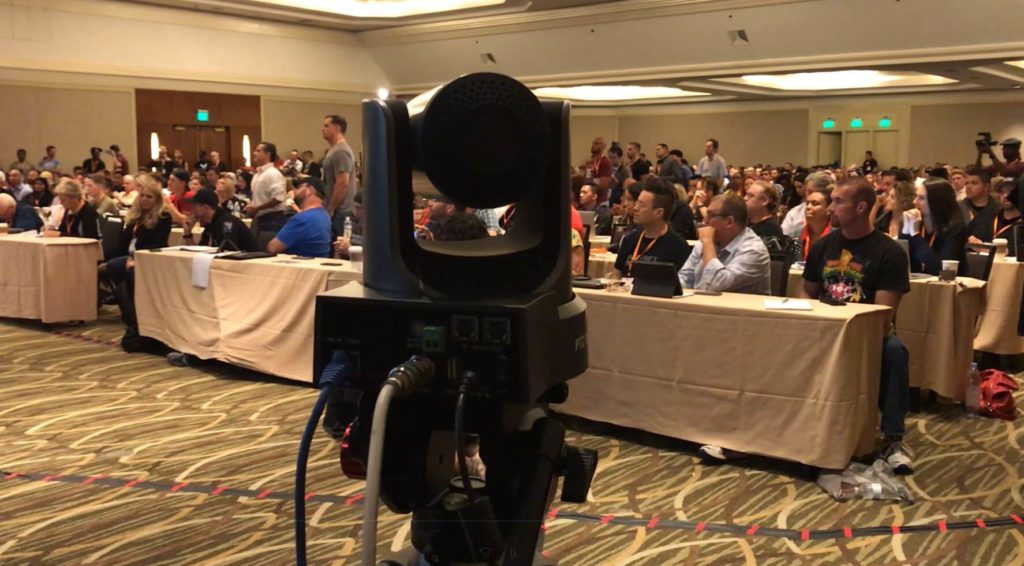 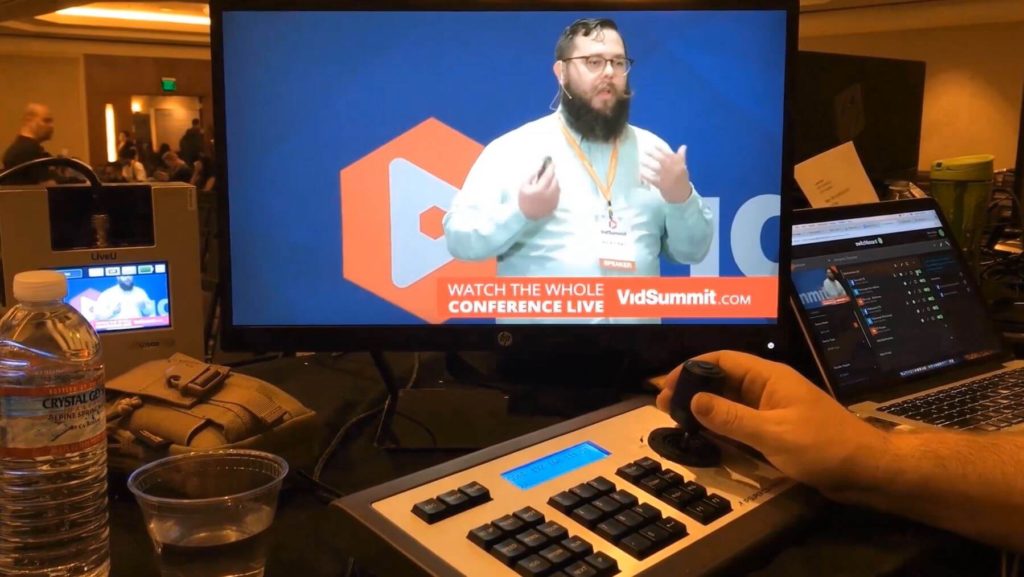 This year we teamed up with David Foster, the Head Geek of Geeks Life and Co-Founder of Live Streaming Pros. The plan was simple. PTZOptics will supply all of the cameras, cables and PoE switches and Live Streaming Pros will provide their custom made live streaming computers running vMix. Each room would have at least 2 PTZ cameras and a static ZCam all connected via 3G SDI cabling to the PCIe capture cards available inputs in each streaming PC. There are three main rooms including a main ballroom, a theater and a large room called “West Chester”. Each room has speakers lined up to be live streamed and recorded from 8AM to 6PM each day with a 1 hour break for lunch at noon. 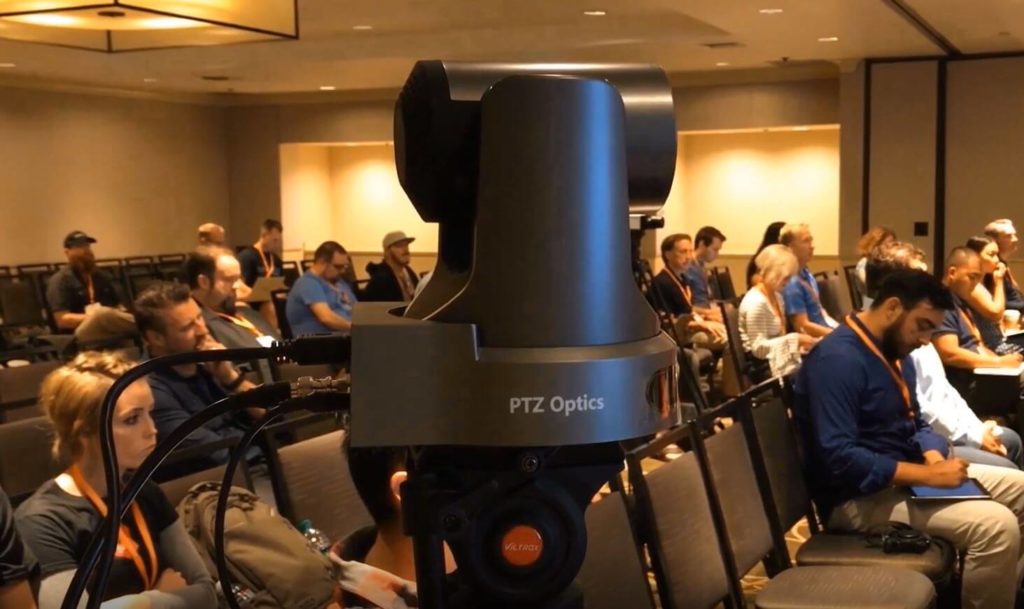 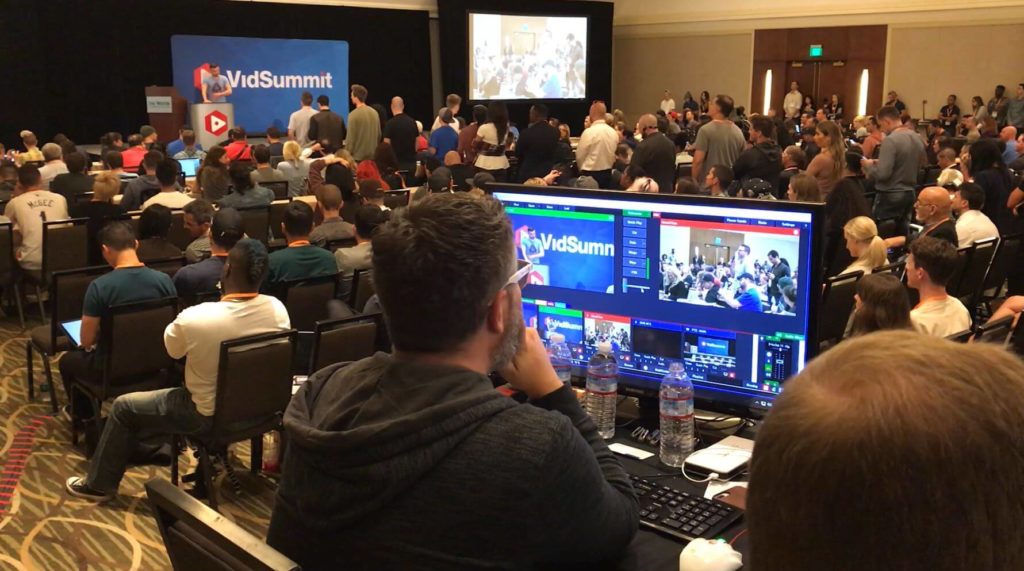 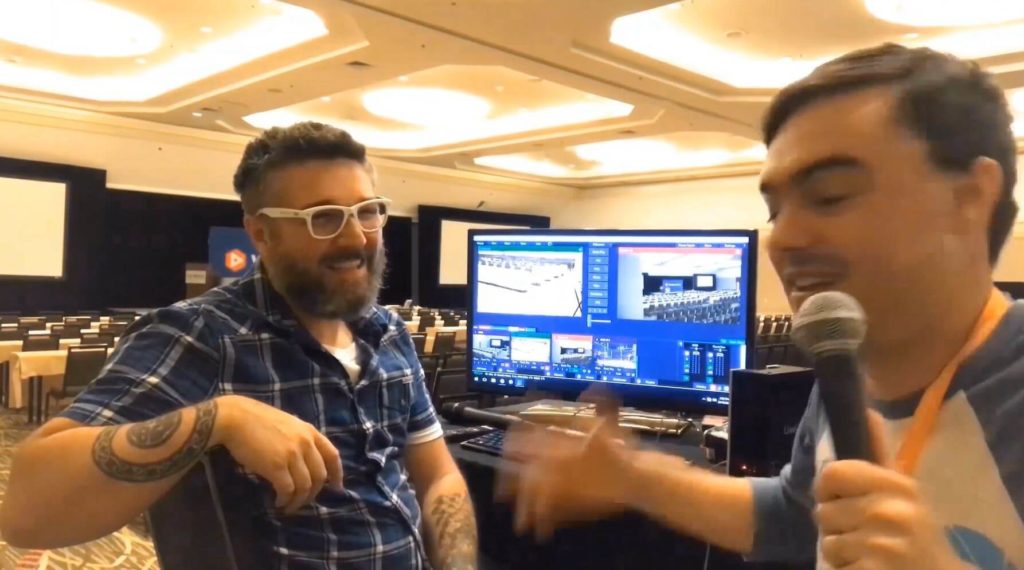 For the large room we have (2) 20X SDI PTZOptics cameras along with a Wide Angle ZCAM-VL box camera we have set up for a stage/crowd shot. This is the stage where the biggest name keynote speakers are going present. The combination of our three cameras in total, will allow us to use one camera for tracking the talent with our PTZ joystick. Each PTZ camera for the large room will be controlled over IP using the IP-JOY Joystick which will be connected to the same Ethernet switch as the cameras. Each camera will have it’s own IP address and can be controlled with the joystick, vMix or any iOS mobile device. Since this is a public event, we were sure to bring a WAP (Wireless Access Point) with us.

The Theater Room is also fairly large and ideal for multiple PTZ cameras. The plan is similar to the Main Ballroom except we will be using the HuddleCamHD Serial joystick controller which is a little easier to set up since there is no networking involved. The three camera setup will allow the camera operators to smoothly transition in-between camera angles and follow speakers that are moving on stage. 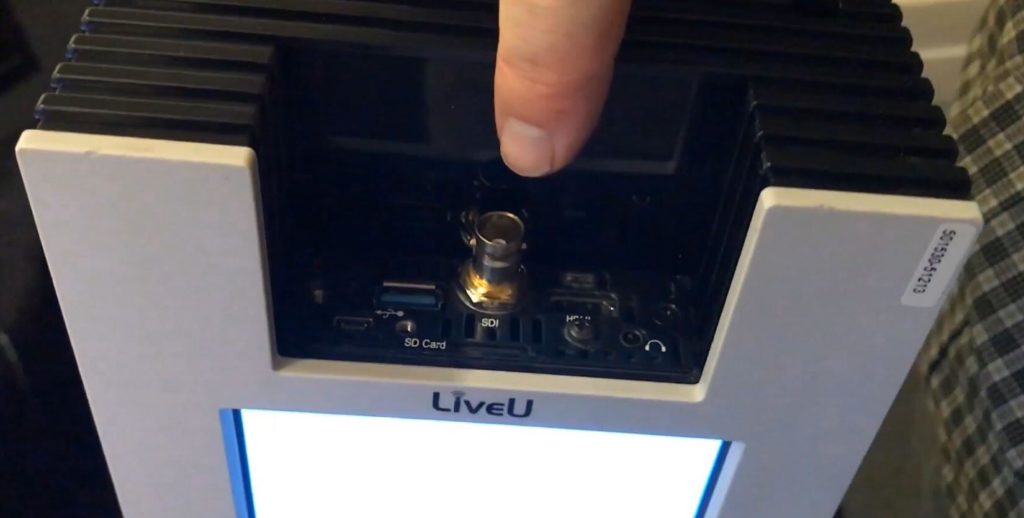 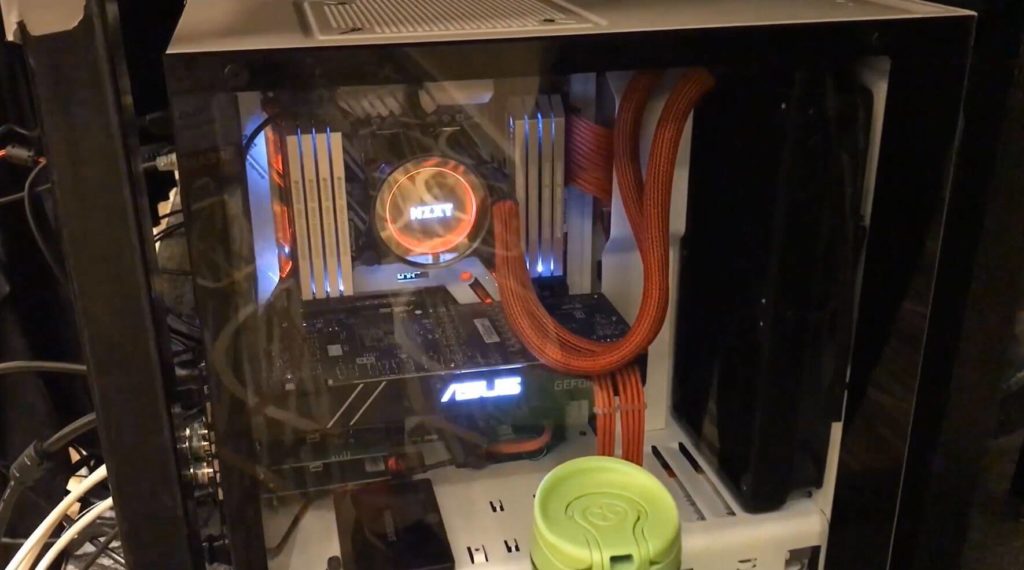 David has recently converted from Livestream Studio to vMix for live video production and hasn’t looked back. I am an avid vMix user myself so we go along quite nicely. On the software side David made sure to have VidSummit branded content made in the vMix title editor which allowed us to quickly popular lower third titles throughout the event as speakers changed. We were also able to connect to each camera over the network for IP camera control inside vMix. This allows us to create known camera preset positions inside vMix with names. Once each camera is connected to the vMix system we can open the input, select the PTZ tab and create presets which take little snapshots of the camera’s viewpoint from that position. Since we are working with volunteers in each room it’s great to have a list of preset positions where they can see exactly where the camera will go with the click of a button.

The actual live streaming will be done with a LiveU wireless internet connection. My advice to Derral Eves, the event manager, was to live stream in 720p and record the events to a local hard drive in 1080p. David recommended recording the cameras in 1080p at 60 frames per second to get the best crisp quality that he uses for his own live streaming and video production.

We understand that everyone may not be able to make it to your wedding, especially if it’s a destination wedding. This presentation includes overviews on understanding the client from a wedding photographer’s point of view along with easy tips for live streaming any wedding. We review live streaming equipment recommendations for discreet camera placement that won’t interfere with the special day. We talk about using your own computer and how you can live broadcast the wedding with existing equipment that you may already own. We review the basic cables necessary for the audiovisual connections used for live streaming along with best practices for PTZ camera placement and operation. Finally, we review ideal camera settings for broadcasting a wedding live and differences between live video and traditional photography. This includes a plethora of camera setting options and the abilities in live streaming software you can take advantage of, such as an ISO Recorder, to record multiple cameras at once.

How many trillion-dollar industries are expected to double in size over the next ten years? The $1.1 trillion dollar global event industry is expected to grow to $2.33 trillion by 2026 (Allied Market Research). Analysts have been astounded by the growth in the events industry over the past decade. A new “experience economy” has emerged during the age of the smartphone proving that events are still important to the modern consumer. Today consumers are more willing than ever before to pay for real-world experiences that break through the clutter of our technology-saturated lives.

As the events industry continues to grow it’s interesting to see the early adopters using live streaming technology to add new revenue opportunities to existing events. The 2020 Worship Summit, for example, decided to host a hybrid event with in-person attendees and virtual ticket options in order to best serve the house of worship market which includes many organizations spread throughout the United States and the world. The event decided to make live streaming a priority to encourage attendees who may not have the budget or time to travel could still feel included in the event.

The Worship Summit was hosted on January 24th, 2020 and the attendance results surprised the event managers. Over 5,000 churches watched YouTube and Facebook before the eight-hour broadcast was over. The online attendance was 100X the in-person audience. While the event managers were interacting with ticket holders, they quickly realized that the online audience was going to be much bigger than in-person attendance. The team realized the importance of live streaming technology in short order, and started to strategize on ways to deliver the best possible experience for online viewers.

The event organizers decided to broadcast from a studio that was equipped with eight PTZOptics live streaming cameras, LED studio lighting, and high-quality DPA:Define microphones headset for the hosts. The production used software called vMix to broadcast directly to YouTube and Facebook. A producer was available during the entire presentation to switch between multiple cameras and call PTZ camera presets that could zoom in and engage the audience.