PTZOptics cameras are used to create many great audiovisual solutions for Education. From live streaming sporting events to distance learning for University level courses PTZOptics has a lot to offer the educational space. Check out cases studies below that outline use cases with Southern California University’s Keck School of Medicine, Willamette University, Indiana University of Pennsylvania and the Frisco School of Music.

“We’re flipping the classroom, one recording at a time”, this is the motto of the Soto Studio run by Gary San Angel inside the University of Southern California’s Heck School of Medicine. The flipped classroom is a highly regarded educational strategy for delivering interactive media into a blended learning environment. The studio is often used to produce high-quality recordings for professors who are preparing to deliver portions of their curriculum through online learning courses. The idea of the flipped classroom is to essentially bring the homework into the classroom and make learning via online tools the homework.

As you can imagine, the need for lecture capture solutions has also grown outside the studio space and Gary often works with teachers in classroom and auditorium environments. Using the remotely controllable PTZOptics NDI cameras, Gary has developed a functional plan to extend the school’s capabilities. 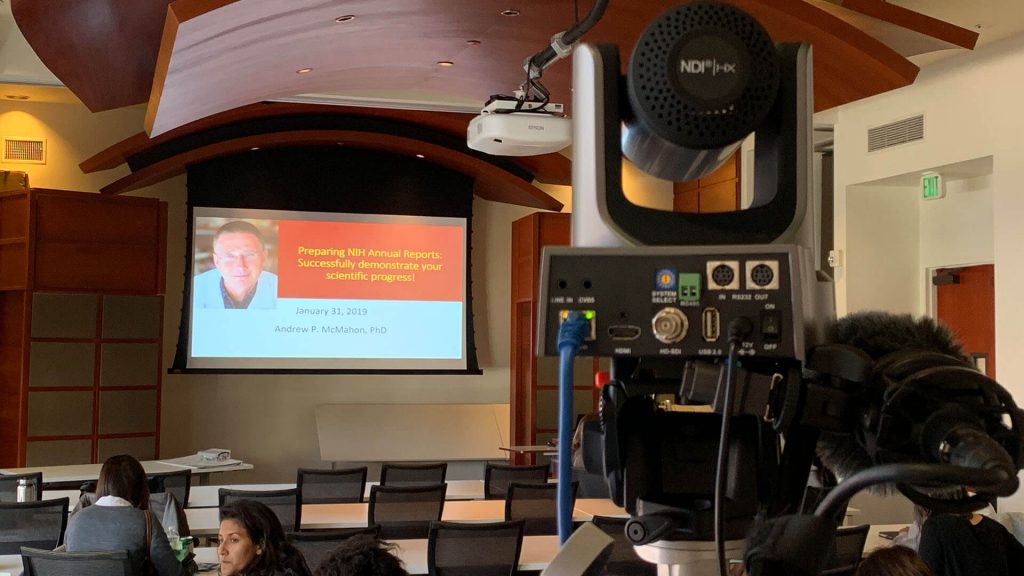 Flipping the classroom with video production

Working with the school’s information technology department Gary has secured a static IP address on the university’s extensive network for the PTZOptics camera. This allows Gary to easily send out the camera to any location on the school’s network and record a lecture. Gary pairs the PTZOptics camera with a small audio mixer used to capture audio. Sometimes the audio mixer features a directional microphone and other times Gary uses a wireless lapel. Either way, Gary is able to record broadcast-quality 1080p video connecting the PTZOptics cameras using NDI with Wirecast. Inside Wirecast, Gary is able to monitor the presentation and set up multiple cameras presets. Gary has also used the NDI scan converter to capture videos from PowerPoint presentations to be included in each recorded lecture. Wirecast provides video mixing capabilities to set up picture and picture layouts.

School Graduation – How to Live Stream

Morgan County High School’s digital media instructor, Tom White, sought to produce an uncomplicated workflow for this past year’s graduation. With a lack of camera operators and no power in the press box, he found himself needing a low maintenance, low cable solution. White used two 20X PTZOptics SDI cameras and a HuddleCamHD Joystick to stream the ceremony. With the PTZ cameras, he was able to capture a variety of angles and zoom lengths. Only a single operator was used to set and call over 7 presets for each camera with the HuddleCamHD Joystick.

Willamette University is a small liberal arts school located in Salem, Oregon where Christopher Sabato, the Assistant Director of Athletics for Media, organizes live broadcasts for the sports teams. From outdoor soccer matches to indoor basketball games, Sabato shares with us his techniques for live broadcasting these events and how the student’s families watch from out of state.

At Willamette University, the majority of the student population comes from out of state making it important to the Athletics Department that these families are able to watch the live sports broadcasts online. Using a selection of live streaming hardware and software which includes PTZOptics cameras, Wirecast, Magewell capture cards, xKeys controllers and more, Sabato regularly produces high quality live broadcasts the schools sports fans enjoy all season long. At the end of the day, it’s all about the fans that cannot make it to every game who are now able to watch live and enjoy the broadcasts from the comfort of their homes.

For outdoor broadcasts during the Soccer season Christopher uses a PTZOptics 20X-SDI camera housed an outdoor enclosure to capture all the action using a PTZ joystick controller. The Dotworkz outdoor camera enclosure is designed for permanent outdoor use and includes two weather sealed cable ports which Sabato uses for HD-SDI video and RJ45 converted to DB9  to be used for camera control with the HuddleCamHD joystick. The camera captures all the action from high above the field mounted on top of a SkyHawk TriPod mount made by US Sports Video. This giant tripod allows Christopher to follow the direction of game play from high above the athletes on field. “I don’t have a big production crew. So everything has been designed to be operated by myself or one other work study student.”

During Basketball season, Sabato uses 5 cameras to produce a professional video broadcast with the PTZOptics Producer Kit, Wirecast 7, HDMI & HD-SDI Magewell capture cards and the xKeys 24-button controller. The broadcast quality looks like it could be available on ESPN and Sabato has used a few IP networking techniques to pull in the live scoreboard timer he explained for us. “I have a clock camera setup using NDI and Newtek’s Connect Pro that came with the producer kit with effectively zero latency.” Using a clock camera as you can see in the picture above, Sabato is able to take the video feed and crop just the timer and shot clock for his game title in Wirecast. With a little Wirecast magic, Sabato is able to layer the live shot clock and game time onto his virtual scoreboard title. 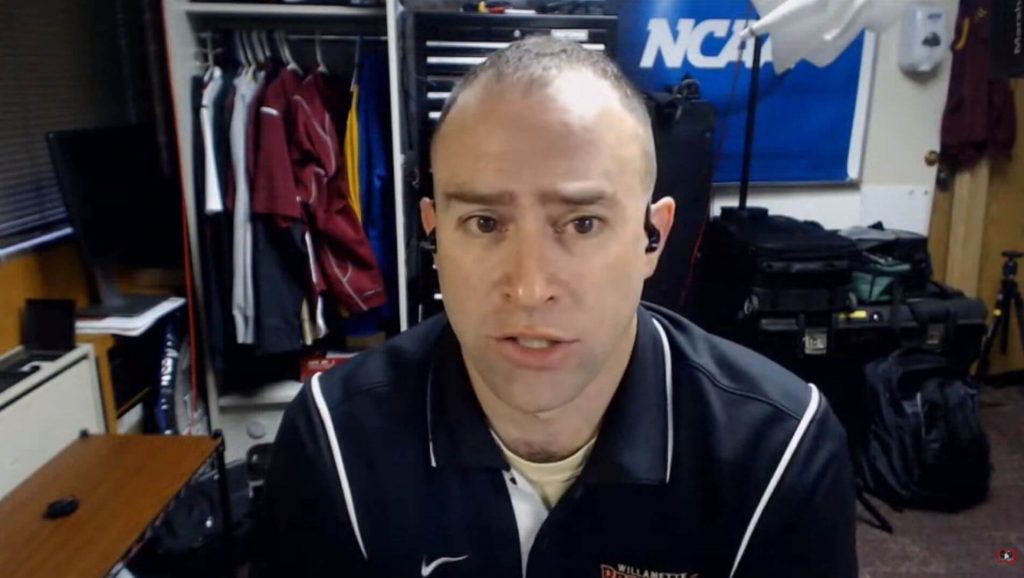 During every live broadcast, Sabato tries his best to include a play by play announcer audio feed “It’s our goal to have play by play in all our sports broadcasts. ” Once the game starts a dedicated play by play announcer will handle all audio including ad spots bumpers and pre-recorded interviews. The Technical Director can play video overlays, with no audio, to match what the PxP is sending. The Technical Director mixer is sending an aux out to a Galaxy Audio Anyspot wireless receiver. The play by play audio workflow is explained below along with the entire video/audio system outline.

You can watch a live interview with Christopher above. Don’t miss the detailed setup outline from Christopher below.

The Frisco School of Music provides exceptional music lessons in Frisco Texas (TX). Students can learn to Play; Piano, Guitar, Voice, Violin, Drums, Strings and More! When it comes time for performances Frisco School of Music uses Wirecast to live stream the events using PTZOptics HD-SDI cameras. Because the cameras are mounted in various locations in the auditorium Frisco School of Music is using the RTSP streaming capabilities over Cat-5 network cabling. Wirecast will take in the RTSP streams over your network and allow advance video mixing and production. Below we have live test footage from a recent performance.

Frisco School of Music in Frisco, Texas has shared from test footage from (4) PTZOptics 12X-SDI cameras. Frisco School of Music uses Wirecast streaming over IP with the PTZOptics cameras IP video output. The HD-SDI video output is a secondary option they use with a black magic video input card for their PC. As you can see the video stream is clear and low light scenarios look great.

Higher education is using the simultaneous streaming capabilities to equip rooms for web conferencing while at the same time accommodating HD recording platforms such as Panopto and MediaSite Recorders. With web video conferencing software such as Skype, GoToMeeting and Zoom.US becoming so popular in the education space it is ideal to have a camera that can support existing hardware and newer online meeting technologies. For distance learning our remote PTZ control capabilities allow both ends of a video call access to the rooms camera. This type of control is being used by teachers to simplify camera control down to a simple mouse click to direct the camera to the area of attention.

Design your next layout in minutes with our free online tool!