Radio is an amazing medium, “Truly we reach so many people” says Shawn Tempesta the host of Mix 94.1’s afternoon show. Tempesta explains, in his studio tour video available on YouTube that “The one problem is… in a digital world, there is no such thing as viral audio.” Motivated to grow his show’s presence online, Tempesta designed a live streaming studio using (4) four PTZOptics NDI cameras. (3) Three PTZOptics 12X-ZCam cameras are used to produce high quality close up shots of each host and (1) one PTZOptics 12X-NDI PTZ camera is used to capture additionals shots of the entire studio.

Shawn has a setup that rivals traditional television. The beauty is that Shawn was able to purchase the entire system himself. This case study shows what one creative person can do on a budget to help promote their radio show. As you can see above each camera is only connected via a single Ethernet cable. Shawn sets up his streaming system every day because he owns it. Therefore each camera needed to be easy to setup and operate.

TeleSouth Media installed five PTZOptics 20X-SDI cameras to help broadcast select radio shows on the stations website. The media company is currently streaming three shows Monday through Friday and two shows each Saturday. The audio engineers, who are also co-hosts, have the ability to switch the cameras and operate the IP joystick as needed from the control room.

TeleSouth Media launches SuperTalk TV in April of 2019. SuperTalk TV is an HD video stream originating from the Jackson studios for The Gallo Radio Show, The JT Show and Good Things with Rebecca Turner.

The picture above shows the SuperTalk TV show as it is produced live. This LCD monitor is used as a confidence monitor available for guests to see what is going on in the main broadcast area. Each PTZOptics camera is wall mounted securely to the drywall using an HCM-1 HuddleCamHD wall mount. Each camera is powered with a single ethernet cable and video is sent using 3G-SDI cabling.


Live Streaming Made Easy
Get the equipment, network, and support you need to seamlessly stream your events.
The only turnkey streaming solution for schools and churches.

Learn how this radio station used live streaming WCHE 1520 AM Radio recently hosted a radio broadcast which included a live stream to Facebook, YouTube, Twitter, and LinkedIn during a sponsored AM radio hour. The radio station used a PTZOptics Producer Kit to connect three live streaming cameras together for use during the production. The station was able to take a simple audio output from their existing audio mixer and convert that to USB for use with vMix live streaming software.

The station used a PTZOptics 12X-SDI camera to capture multiple views of guests inside their studio. The main host had a 12X-ZCam camera with a fixed view of the main interview microphone. Finally, the third camera was a wide-angle ZCam-VL camera used to show the entire radio studio during commercial breaks.

The live stream results adding thousands of additional audience members to the popular radio stations broadcast. The show is available here on YouTube to view below: 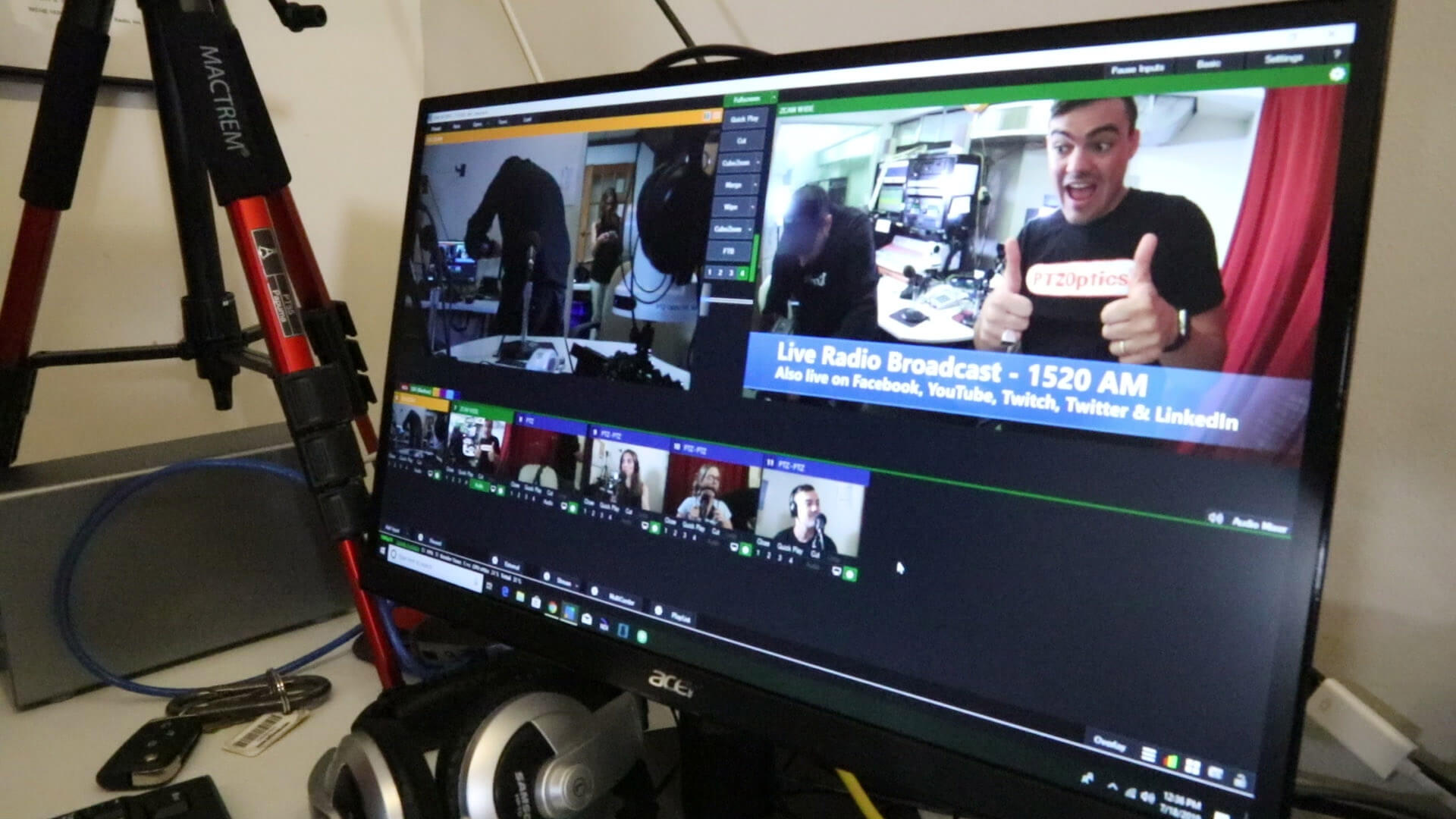 This system used the PTZOptics Producer Kit with a simple NDI (IP Video) networking setup. All of our cameras were powered over ethernet and our video was available via both SDI and NDI. The in-studio system received audio from the radio stations board into a Focusrite USB audio interface used with the vMix PC Software. This stream was then sent to EasyLive via an RTMP stream. The stream was switched between the vMix system and the LiveU IRL feed during commercial breaks.

Access more info on our recommendations for optimizing your radio broadcasts with live video. See more on the monetary opportunities bringing video into your station brings. Take advantage of the tools many radio stations are beginning to implement. https://ptzoptics.com/radio/